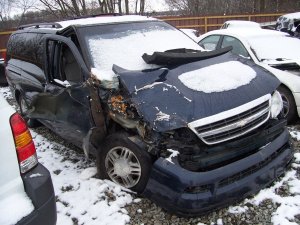 As most of you know already, my wife and kids were in an accident on Sunday morning. I was at work, and the day shift people coming in were telling us that the roads were really bad. I called Kim to tell her that the roads were bad, and we might even consider not going to church. She said she would try, and if it was too slick, she would go back home.

I went on doing what I do. Most of it involved a situation that developed at the end of my shift. I gave two pills to a 90-some year old patient at 6:30 AM. 30 minutes later (right before shift changeover started) she asked one of the other nurses, “Where’s my hearing aid?” I knew it was on her bedside table when I gave her the pills, but it was no longer there. We looked through all of her linens, clothing, table, etc, and couldn’t find it. The patient then mentioned that she had just swallowed a “big pill” a while ago. Both pills I gave to her were very small (baby aspirin size), so we said, “uh oh.” I paged the doctor, and the short version is that they did an emergency x-ray and found (guess what…) a hearing aid. The GI specialist elected to let the patient pass the hearing aid (along with the battery, which she swallowed separately). She passed it just under 24 hours later. Her question? “Can I still use it when it comes out?” Classic.

Anyway, this situation was almost resolved (I had ordered the x-ray and was now charting a note about what had happened) when the charge nurse called out, “Steve, come here now!” As I approached her, she held out the phone and said, “It’s your wife…she’s had an accident.”

My wife told me that the van went off the road and hit a tree, but that everybody was ok, no major injuries. I told her I would be home as soon as I could. I then finished my charting and left work. By the time I got there, the van had already been towed away and my family was home safe. The very kind lady who gave them a ride home passed me a block from my house (she was leaving as I was coming home), so they barely got home before me. I pulled in and Kim told me what happened.

She said that she had made it about a half mile up the road from our subdivision when she saw a car in the ditch on the opposite side of the road. She decided to slow down, and in so doing, the front of the van started to drift to the left. She swerved right to correct, and the van went off the road, hit a tree right on the front passenger corner of the van (at the headlight) and slid down the road another 20 yards. The airbags deployed, saving her and my son (who was in the passenger seat) from serious head trauma. They both banged their knees on the dash, which was pushed backwards due to the engine moving into the firewall. And that is the extent of the injuries: bruised knees, sore muscles, and soreness along the seatbelt lines on everybody but my youngest. She has no injuries whatsoever. Evidently we have to buy all new car seats, however, since these are no good now. I don’t quite understand that, since they have gotten worse beatings being transferred between vehicles, but I guess those are the rules. The insurance is paying for them anyway.

We drove out to the salvage place on Monday and collected all of our stuff (including the license plate, trailer hitch assembly with wiring, 15,643 crayons, a few cassette tapes, an mp3 player, and the rest of our stuff. I took a bunch of pictures as well.
The insurance company informed me today that the van is a “total loss.” I could have told them that Monday, but I’m not a professional insurance assessor. I guess we all need jobs, right? I’m sure it took a lot of know-how to look at my van and say, “Yep. It’s a goner.” Actually, they estimated that it would cost just over $9K to fix it. I don’t get that, since it would need an entirely new front end, structural realignment of the frame/chassis, probably a new front axle, extensive engine work, new airbags, and at least two new windows. I would have thought it would cost more along the lines of $15-20K to fix. Whatever.

So now we wait for the insurance company to get us the check so we can send it to the bank so they release the title. When that happens, we will be in the clear, with just a car loan on our Grand Am for the value of the Grand Am. Then we can trade in the Grand Am for a van. We are going to try to function with just the van and my motorcycle. Since we have a family that carpools with us for the kid’s school, Kim doesn’t need the vehicle in the mornings, so I could drive to work most days (especially if it’s too cold or snowy/icy).

Thank you, Lord, that my family is ok and that You are working out Your plan in our lives. God is truly good. This accident, though not what we would have chosen, has served to solve several problems in our lives: we were upside down on the van loan. We had gap insurance, so that is taken care of. The van needed about $2K worth of repairs that do not need to be done now. Problem solved.

This is a picture of our van before this accident (when it was only 5mos old): 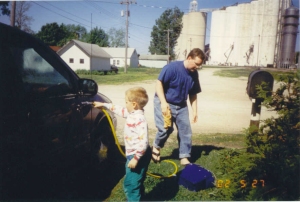 Little did Nathan know that he was washing the very door that would protect him from a tree, six years later.
Advertisement