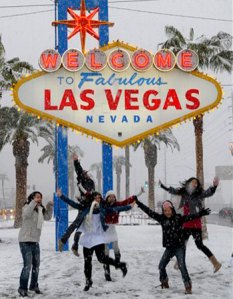 http://www.foxnews.com/story/0,2933,468344,00.html
Here’s the story at this link:
LAS VEGAS — A rare snowfall blanketed Las Vegas on Wednesday, canceling flights, snarling traffic and dusting palm trees and marquees along the Las Vegas Strip with accumulations that were expected to reach 3 inches overnight.
Other locations were forecast to receive as much as 8 inches of snow in the second winter storm this week to drop snow on the desert city.
Snow piled up around the famous “Welcome to Fabulous Las Vegas” sign on the south end of the Strip, as visitors parked and posed for pictures wearing hooded jackets. In other parts of the Las Vegas valley, snowfall toppled trees, blanketed rooftops and delighted residents who rarely get to see winter weather.
“Sometimes you have to travel to the mountains to see the snow, and now you don’t have to,” said Jose Villeda, 38, as he stuck his tongue out to catch snowflakes outside of Lavo, a restaurant and nightclub at the Palazzo hotel-casino.
Snowfall is common in nearby mountains hills, but not on the Strip or surrounding neighborhoods.
National Weather Service Meteorologist Andrew Gorelow said 3 inches of accumulation on the Strip would break the December record of two inches set in 1967, but wouldn’t match the Las Vegas winter record of nine inches set in 1974.
Gorelow said up to 10 inches could fall in the suburbs in the western foothills of the Spring Mountains. A powerful wet Pacific storm with an Arctic chill was to blame for the conditions that left parts of Las Vegas looking more like Wisconsin than a desert vacation destination.
The Federal Aviation Administration barred flights bound for Las Vegas from departing from airports nationwide. McCarran International Airport did not immediately close, although many flights had been diverted and delayed.
KLAS-TV reported Southwest Airlines had canceled all flights.
“The issue is visibility,” Airport spokeswoman Elaine Sanchez said. The airport has no deicing equipment.
The Nevada Highway Patrol and Las Vegas police reported fender-benders as drivers unaccustomed to snow found themselves spinning crazily out of control. No serious injuries were immediately reported.
U.S. 95 between Las Vegas and Hoover Dam was closed at Railroad Pass, as well as the Interstate 15 between Primm and Baker, Calif., closing the road connecting Las Vegas and Los Angeles. Route 160, the road to Pahrump, also was closed.
The near whiteout conditions had school officials considering a snow day for Las Vegas students.
Clark County School District spokesman Craig Kadlub said the district was watching the developments closely would announce any cancellations early Thursday morning