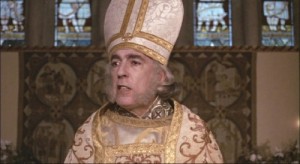 Marriage: that blessed arrangement. A dream within a dream. But what is marriage, really? In the United States, a man and a woman are considered “married” if they stand before an authority figure (minister or judge), and agree to be married. The vows are really secondary. The main thing is that they agree to be married. In other countries and cultures, sometimes marriage is simply a man taking a woman into his home and stating that she is his wife.

What is biblical marriage? It is a formal agreement between a man and a woman that they will put the other person’s needs and desires before their own. The first marriage was between Adam and Eve in Genesis 2. What ceremony was there? The Bible simply says that God brought Eve to Adam, and Adam said, “This is now bone of my bones, and flesh of my flesh.” Then Moses comments, “Therefore a man shall leave his father and mother and be joined to his wife, and they shall become one flesh.” (Gen 2:24)

Inherent in this idea of biblical marriage is the concept of faithfulness. The man leaves his parents (and by implication, so does the woman). He is joined to his wife, and these two people become “one flesh.” This idea of “one flesh” conveys the idea of communion with one other person, but only one other person. The word “communion” comes from the Latin “communis” meaning “mutual participation.” In a marriage that is operating the way God designed, there is a mutual participation in several areas, but I will mention two: emotional and physical.

Physical participation means that you get your physical (need I say “sexual”) needs met by your spouse, and your spouse alone. The Bible is clear when it says that when a man and a woman are married, they have a special connection. “They shall become one flesh.” It doesn’t just mean that they are united physically, but that they have a special relationship.

So what is the definition of adultery? Any variation or deviation from the pattern set forth in Scripture is adultery. If you get your needs met by someone who is not your spouse, you have committed adultery. Many people before the time of Christ thought that adultery was only physical. But God referred to the people of Israel as adulterers when they turned from worshiping him and devoted themselves to a relationship with other “gods.”

And later, Jesus Christ stated that God’s intention behind the marriage relationship was that both people would not only be faithful PHYSICALLY, but that they would be faithful MENTALLY. Matthew 5:28, “But I say to you that whoever looks at a woman to lust for her has already committed adultery with her in his heart.”

Proverbs 5 talks about the perils of adultery. “The lips of an immoral woman drip honey, and her mouth is smoother than oil; but in the end she is bitter as wormwood, sharp as a two-edged sword.” Adultery always looks good, but it never is.

It’s like finding yourself in a boat in the middle of a stormy lake. How did you get there? You were told to stay away from the lake. But you thought, “It won’t hurt to stand on the shore.” And then “Well, if I’m sitting in the boat that is still on shore, it’s not the same thing.” And then, “I think what they meant was, ‘don’t go in the deep part of the lake,’ so I can float here in the shallows.” And then you are in it up to your eyebrows. The storm is rising, and you are in trouble. You think back to the moment you thought about standing on the shore, and you wish you had never taken off your shoes.

Proverbs 5 warns of this progression. It says in verse 7, “Remove your way far from her, And do not go near the door of her house.” God says, “don’t even flirt with the idea of adultery. Stay as far away from it as you can.” He loves you, and He doesn’t want you to suffer the negative consequences of your sinful choices. Verses 15-23 say it all better than I ever could:

Drink water from your own cistern,
And running water from your own well.
Should your fountains be dispersed abroad,
Streams of water in the streets?
Let them be only your own,
And not for strangers with you.
Let your fountain be blessed,
And rejoice with the wife of your youth.
As a loving deer and a graceful doe,
Let her breasts satisfy you at all times;
And always be enraptured with her love.
For why should you, my son, be enraptured by an immoral woman,
And be embraced in the arms of a seductress?
For the ways of man are before the eyes of the LORD,
And He ponders all his paths. His own iniquities entrap the wicked man,
And he is caught in the cords of his sin.
He shall die for lack of instruction,
And in the greatness of his folly he shall go astray.

That, is God’s plan for marriage. Anything else is perversion.

I am the current pastor of the Rapids Street Baptist Church in Adel, Iowa. Every day I commit my life to Jesus Christ. I am also a registered nurse working to support my ministry and my wife and three kids. I am a conservative Baptist. This blog is my view on life. My prayer is that, by reading what I write, you will learn more about me, more about God, and be assisted in becoming the person God means for you to be. If you have a question, just e-mail me at spicray AT gmail DOT com. God Bless!
View all posts by Steve Picray →
This entry was posted in Uncategorized and tagged biblical marriage. Bookmark the permalink.