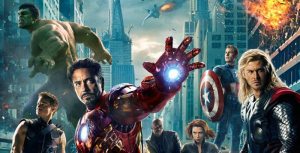 I took my 15 year old son to see The Avengers today. It was an amazingly entertaining movie.  It’s the best movie I’ve seen in the past 10-20 years, literally.  I want to see it again. I mean now.

Special thanks go to my wife’s sisters for the gift of the tickets. While it would have been fine to see the “regular” version, they bought us a gift card large enough so that we could see the IMAX 3D version, which was really nice.

My wife drove us to the theater, the “Goodrich Hamilton 16 IMAX theater.” Nathan and I bought our tickets, received our 3D glasses, and went in the theater. He wanted to sit right up front, which is a horrible place to sit for an IMAX movie, so I overruled and we sat in the middle of the theater. 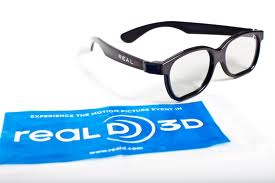 The glasses we received.

As soon as the previews started, I knew something was wrong.  The screen “doubled up” the images to let you know “put your 3D glasses on.”  We put our glasses on, but the screen was still showing double images.  I figured it was maybe a problem with the projector, and hoped they would get it figured out by the time the movie started.

They didn’t.  I sat through about ten minutes of movie before I pulled out my iPhone.  I googled the phone number of the theater and texted Kim so she could call the manager and tell them there was a problem.  She texted back that the manager said nobody else had complained.  We endured it for a little while longer (I didn’t want to miss anything), but about a half hour into the movie I had had enough. I got up and walked to the exit to find the manager.

Right before I got to the door I saw the bin where you put your 3D glasses after the movie.  Someone had missed the bin, and their glasses were lying on the floor.  The glasses looked nothing like the glasses I had been given. I picked them up, put them on, and walked back up the ramp to where I could see the screen.  Guess what:  it looked great! There was no more blurriness or double vision.  I realized that they had given us the WRONG 3D glasses.  I didn’t know there was more than one kind!  I grabbed another pair of returned glasses from the bin and went back to where Nathan was sitting.

The glasses we should have received.

We enjoyed the rest of the movie, as it was intended.  After the movie I told the employee collecting the glasses at the exit that I needed to talk to a manager.  He said, “Well, I think the managers are in a meeting right now.” I said, “Oh, well that’s ok. I’m just a paying customer, so I guess I don’t matter, right?”  He backed up from his “gatekeeper” attitude pretty quickly and said he would get a manager.

The manager appeared, and I calmly said, “Today is my son’s 15th birthday. We just paid $31 to see The Avengers in IMAX 3D.  My wife is the one that called you to tell you we were having a problem.”  I then told him how the movie was unwatchable for the first half hour until I pulled two “used” sets of 3D glasses and realized we had been given the wrong type. I gave him the glasses that we had been given by the ticket agent.

The manager, a young man named Justin, then gave us one of the best examples of customer service I’ve seen in a long time.  He didn’t argue. He didn’t question us. He simply apologized for his employee’s mistake and gave us two vouchers good for any movie, as well as two vouchers good for free popcorn and pop.  I will be going back to this theater, because mistakes happen to everybody. It’s what you do AFTER the mistake that determines the difference between having satisfied customers and having to find a new job because you don’t have customers anymore.

1 Response to Our Avengers Experience