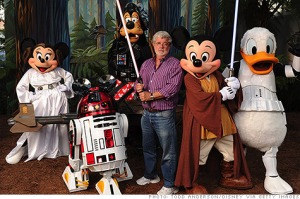 So Disney has acquired Lucasfilm for 4 billion dollars.  Some Star Wars geeks are weeping and wailing over this move.  My son informed me that this means Princess Leia is a Disney Princess now.  Jokes abound, what with “Bambi wan Kenobi,” “Beauty and the Sith,” and “Emperor Palpatine’s New Groove.” I can see how it could go bad, but there is also potential for good. As Luke said, “I see the good in you!”

I really liked Star Wars episodes 4-6 (the originals….we don’t watch that special edition garbage in my house.).  Empire Strikes Back was my favorite movie for many years, only to be dethroned by Apollo 13 in 1995. In part, Star Wars was one of the few bright spots of my childhood, which had enough bad things in it. I shared a Darth Vader costume with my brother one year for Halloween.  I had Star Wars action figures.  I used to play with them in the tub, and one day Boba Fett flew up in the air, over the shower curtain, and into the toilet.  The toilet water was murky (with Comet), and so I flushed to clear out the green murk so I could see Boba Fett.  I’d like to think he made it all the way to the ocean, but I don’t think so.

My best Christmas present as a child was a Millennium Falcon toy from my mom that I knew she couldn’t afford. It had a detachable top, and a real “smugglers compartment.”

Episodes 1-3 were not as good as the originals. If those movies were envisioned in their entirety in 1977 by George Lucas, then I completely support his decision to start with episode 4, because Phantom Menace was just that bad. If he had started with Episode 1, we wouldn’t be having this conversation.  Lucasfilm would have been sold to Disney for a buck and a handful of Pogs in 1992.

I have read the criticism of George Lucas, and I believe much of it is warranted.  His first mistake was to mess with the originals. You don’t take the Mona Lisa down off the wall and start repainting.  I sincerely believe that Disney’s first move as the new owners of Star Wars should be to release a “ORIGINAL EDITION” of the first three movies on DVD/Blu-ray.  That’s so I can finally throw out my trilogy on VHS.  I hate VHS. 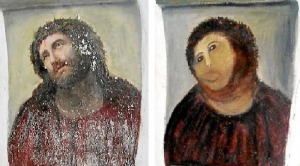 Also, the decision to feature Jar Jar in the second trilogy was just asinine.  Star Wars fans almost universally felt like Lucas was mocking them.  I can understand the mistake of putting him in the first movie, but when fans have reactions like the one below, you have to understand that maybe he should just quietly disappear.  We hoped that he would, but he has roles in the next two movies. Argh! 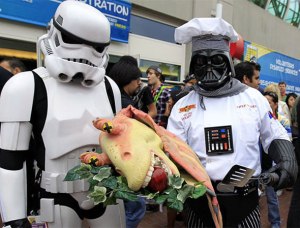 We were not amused, George. Learn to take a hint.

Actually, I’m hopeful.  The main reason for this is that George Lucas is going to be a “creative consultant.”  A consultant is someone that gives you advice, and you say, “Oh, that’s nice.” And then you go ahead and do whatever you want anyway.  I know this, because all these medical shows have consultants, and they have so many medical errors in them it’s not funny.  So George can whine about the lack of “Jar Jar-like characters” in the new movies, but it won’t matter.

Is there a possibility that Disney may mess up the franchise?  Sure.  But I feel more at ease with the future of the franchise in the hands of a Disney committee than in the senile brain that brought you “Crystal Skull” and “Red Tails” (Both movies were bowsers).

Disney has announced that they will be releasing Star Wars episodes seven through nine, with episode 7 being released in 2015.  I hope they use the Timothy Zahn trilogy for the storyline.  I hope they pick good actors to play Luke, Leia, Han, and the rest.  I hope the pacific is as blue as it has been in my dreams. I hope.