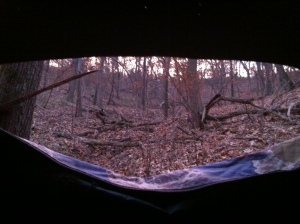 Looking out of my blind, this is what I see.

I was excited to get to go deer hunting again this year because I didn’t get to make my annual trek to my Dad’s farm in Missouri last year.  Last year I hunted on public land in Indiana.  I didn’t see a single deer the entire time. However,  I forgot that it really helps to be in shape.

On Thursday I dragged my family out of bed at 6:30 in the morning so we could make the nine hour trip to my dad’s farm (including a stop at the store to buy my license).  We packed everything in the van and hit the road.  We made good time, only stopping for food at McDonalds in Hannibal, MO. They wanted to charge us $1.09 for a glass of water, and yet they gave us eight sauce packets for our nuggets. They usually only give three packets, and then they charge 25 cents per packet if you want extra.  So they gave us $1 worth of packets, but not the water. I know: I’m obsessing.

We arrived on the farm at 3:20pm, and I took my stuff inside so I could change and get out in the woods before sunset.  I walked down the lane and then downhill into the woods to my usual spot and set up my blind. I have a Doghouse blind (by Ameristep) that I have used for years.  It folds up into a backpack, so it’s easy get into the woods (except it weighs 14 pounds, plus the four pound chair I pack with it).  You unfold it, then set up the collapsible rods to keep the roof up, and stake in the corners.  Then you get in, and wait. The deer can no longer see you, and they will have a much harder time hearing you or smelling you.

I only had to wait about fifteen minutes when a young buck started going by about 50 yards east of me.  Suffice it to say (this is a family blog), he isn’t going anymore.  My family was going to head on to our friend’s house in Iowa, but they were still here at that point.

And now we get to the out of shape part.  Do you know how much work it is to process a deer?  For the squeamish: you may want to stop reading right here. Seriously, I don’t want to get any phone calls.  It gets kind of graphic.

Step one is to shoot the deer.  Step two: make sure the deer is dead. There have been hunters who skipped step two and got lacerated by the deer kicking them with those razor sharp hooves. Just poke the deer in the eye with a stick.  If it doesn’t move, it’s dead.

Step three: field dress the deer.  Another term for this is to “gut” the deer.  I always start by making an incision slightly inferior to the xiphoid process (I cut the skin just under the ribcage in the middle of the chest, for you non-medical types), and then cutting the skin open from the neck to around the rectum. Then I cut through the sternum, and cut everything at the top of the thoracic cavity (esophagus, etc).  At this point it’s just a matter of cutting the diaphragm and then reaching in and ripping everything out of the deer (it’s only attached slightly).  The hardest part is cutting through the pelvic bone to get the end of the intestines out without spilling urine or feces on the deer. Also, if it’s a buck, you have to make sure you cut away his “equipment.”

When that was done, I grabbed the deer by the antlers and started dragging it up the hill. Slowly.  No, seriously, really slowly.  To get an idea how slowly, find something in your house that weighs 200 pounds.  Then drag it up your staircase.  See how far you get before you stroke out.  I dragged the deer about 10 yards, then I stopped for five minutes to rest. And I had about 100 yards to go.  It was getting dark and I could hear the coyotes, so I was not excited at this point.  I kept going, and finally made it to the meadow at the top of the hill. I used my deer cart the rest of the way, and got the deer back to the house.  I hung it up in the tree using my gambrel pulley system, and went inside to collapse.  I had only been on the farm for three hours and I was already exhausted, but I had a deer in the tree!   The next steps are: let it hang in the tree for a day or three (depending on the temperature outside), skin it, cut out the tenderloins, and cut off the legs.  The rest of the meat (neck, ribs, etc) is too hard to process without getting a lot of tallow in the meat which makes it taste waxy, so I don’t bother.

A friend of mine told me a trick for venison last month. He said you take the deer meat and soak it in milk overnight, and it tastes just like beef.  I tried some and I can say that either he was lying and that was steak I was eating, or he’s right.  I’m going to try that this year.

I went out again yesterday morning, and saw two deer throughout the day, but didn’t have a good shot on either.  Then, right near sunset, I was in the same spot as the first night, when another deer took exactly the same route as the first one.  I thought it was a doe, but it was a buck with his antlers broken off (it’s easy to tell when you are right next to them, but from 50+ yards away, it’s not so easy).  So repeat the process from the night before.   Needless to say, I was exhausted.  I fell asleep early and got about nine hours of sleep. This morning I sat in my blind for a few hours, and didn’t see anything.  I guess these deer don’t like the morning.  So then I came back to the house, ate breakfast, and relaxed for a few hours.  Now I am going to process the first deer (the second one needs to hang for at least today).  I’m not sure if I’m going to go back out or not.  Three deer sounds nice, but I’m getting pretty tired.  Plus, that’s 50% more work.

I love to hunt, but I’ve discovered that if you’re not in shape, it’s not so much fun.  I’m going to be in shape next year.