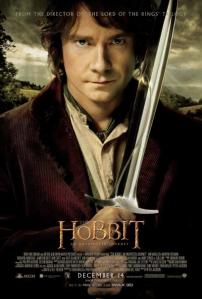 I won two free movie tickets at work a month ago.  I knew right away what movie I would see (I’ve been waiting for a year for The Hobbit to come out).

First off, let me say that I was impressed with the previews they showed before the feature. The first preview was for “The Lone Ranger” which stars Johnny Depp as Tonto. I will be seeing this one.  The next preview was for the new Star Trek movie.  Check. Then came a movie called “Host” which was kind of sci-fi, and depending on the rating, I might see it (I don’t watch rated R movies as a rule).  Then came “Warm Bodies” which seemed to be a quirky, funny kind of zombie movie, told from the zombie’s perspective as he becomes human again (I think?).  Then the biggest movie (ha!) preview of all: Jack the Giant Slayer.  I’ll probably catch that one from Redbox.   All told, a solid lineup of previews.

On to the review of The Hobbit, and you can consider this your spoiler alert. If you want to see the movie first, don’t read this post until you’ve seen it. Let me start out by saying I’m a huge Tolkien fan.  I read The Hobbit and The Lord of the Rings (LOTR)  when I was 11 years old, and several times since. I went to all the LOTR movies when they came out, and I explained all the differences between the movies and the books to my wife (ad nauseum).  My biggest beef:  Frodo wasn’t carried to Rivendell by Arwen, but by Glorfindel. I know they did this to give Liv Tyler a bigger part, but I still don’t like it.

That being said, you’ll understand that any deviation from the book is going to bother me.  The Hobbit was written as a children’s story. From what I remember (I haven’t read it for several years), there isn’t very much fighting going on, and the dwarves usually stumble their way into the situations in which they find themselves. The “movie version” dwarves are hardened warriors with battle skills to rival a Navy Seal.  If you compare these dwarves to Gimli in LOTR, you’ll see the difference very quickly: Gimli is more like how dwarves were portrayed in the books: dangerous, but kind of bumbly too.

Overall I think Peter Jackson did a good job with the translation of the book to the screen, and I understand that he gave himself an “out” by having “Old Bilbo” say at the beginning (to Frodo), “I can honestly say I have told you the truth. I may not have told you all of it.”  And with this comment, Jackson gives himself the right to embellish the story however he wishes.  I wondered how he was going to turn a 320 page book into three 3-hour movies, and now I know.  He added extra details and subplots that weren’t in the original book, and there were far too many battles and swordfights.   One example: in the book, Bilbo got caught by the trolls, and the dwarves were captured by the trolls in small groups when they came to look for Bilbo. They all ended up in sacks, and it was only Gandalf getting them to argue about the best way to cook the dwarves  that saved the day. In the movie there is an extended battle sequence during which the dwarves are flung about, and swords/knives are used by both sides, yet not one injury is inflicted on anyone.  Then it is only when they threaten to kill Bilbo that the dwarves lay down their weapons (Hollywood hostage style….something that never happens in real life).  That’s just one example.

When I watched LOTR, I was swept up in the story, the characters, the scenery, and the music.  The Hobbit has all of those things, but it also has a lot of carnage. It got to where I found myself thinking, “Oh great. Another battle.”  I also caught myself looking at my phone at times wondering how much longer the movie was going to be.

My review in short: the movie was good, but it was too long.  To paraphrase Bilbo himself, the movie felt “thin, sort of stretched, like butter scraped over too much bread.”

Will I see the next one? Yes.  But trepidatiously.

I am the current pastor of the Rapids Street Baptist Church in Adel, Iowa. Every day I commit my life to Jesus Christ. I am also a registered nurse working to support my ministry and my wife and three kids. I am a conservative Baptist. This blog is my view on life. My prayer is that, by reading what I write, you will learn more about me, more about God, and be assisted in becoming the person God means for you to be. If you have a question, just e-mail me at spicray AT gmail DOT com. God Bless!
View all posts by Steve Picray →
This entry was posted in Movies. Bookmark the permalink.

2 Responses to The Hobbit: Unexpected Stuff