Let’s say you are an entrepreneur. Let’s say you invent something that improves the world, and makes people’s lives better. Let’s say that you then help found a company. Let’s say that eventually you become the CEO of that company. And now let’s say that 11 days later you are pressured to resign because six years ago you donated money to a political cause that over half the people in your state supported. How do you feel?

All that happened to Brendan Eich. He invented the Java programming language. He co-founded Mozilla in 1998 and worked there for over 15 years before becoming the CEO 12 days ago on March 24th. Yesterday he was pressured to resign because it was revealed that in 2008 he donated $1000 to the Proposition 8 campaign in California, which was a statewide referendum (that PASSED) defining marriage as between a man and a woman only.

Why did he resign? Because he didn’t toe the party line with the liberals and the gaystapo. Because he took a stand on a nationally divisive issue. He didn’t even make a statement in 2008, he just gave them some money, and for someone who makes as much money as he probably does, $1000 is pocket change. But he wrote the check. And that’s unacceptable.

However, I don’t believe they deserve special status. This would be like me deserving special status because I prefer Miracle Whip instead of mayonnaise. Whether my preference is genetic or my own choice doesn’t matter, I use MW. Does this give me the right to castigate those who use mayonnaise? Am I now able to get people fired from their jobs who don’t support Miracle Whip?

Now I know that’s silly, but it’s just an analogy. As I’ve said before, at first, gay people just wanted to be left alone. Then they wanted acceptance. Then they wanted approval. And now they want endorsement. Pretty soon, if you don’t actually “come out” and say that YOU are gay, you will be looked down on. 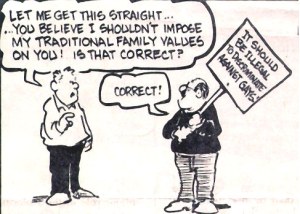 Brendan Eich lost his job because he agreed with a majority of the citizens of the state of California, but disagreed with a small, goose-stepping, brown-shirted minority.

Tell me again how gay people “just want to be left alone.”

1 Response to The Gaystapo Strikes Again