LED Light Bulbs: Get Some!

A week ago I attended a talk by Dr. Neil Degrasse Tyson at the University of Indianapolis. He discussed current events in science generally, and astrophysics specifically. He was very entertaining, and I enjoyed the lecture immensely. He only mentioned evolution during the Q&A time at the end when someone asked a related question.

But one thing he said stuck with me. He was talking about how the United States is lagging behind other countries in science innovation. As an example he mentioned the three men who won the 2014 Nobel prize for Physics: Isamu Akasaki, Hiroshi Amano and Shuji Nakamura. Notice anything about those names? Dr Tyson’s point was that they are Japanese, and the Japanese (and Koreans) are outpacing us in science innovation by leaps and bounds.

But that’s not why I am writing this blog post. My post has to do with the REASON they won the Nobel Prize, specifically, “”for the invention of efficient blue light-emitting diodes which has enabled bright and energy-saving white light sources”.”

You see, when they came out with these Compact Fluorescent monstrosities, I was alarmed, because they said, “To improve the environment, you need to stop using those light bulbs made from glass and carbon, and start using glass and poisonous mercury. For the environment.” I didn’t want the things in my house. “But they’re more efficient” they said. “They’ll last longer” they said. Phooey on you, I said. I don’t want to have to call the EPA every time I break a light bulb.

But here is the answer to that problem: LED light bulbs. They use a fraction of the energy, save money over time, and are better for the environment. Dr. Tyson asked us all, “Does anyone here not have LED lights in their home, raise your hand. You’d better not raise your hand. Get your butt out there and get some! These are highly efficient sources of light, they give off hardly any heat, and they discovered it.” Evidently the invention of blue LED allowed scientists to develop white light LED light bulbs.

I had never heard of LED bulbs. After I got home I did some quick research, and found out that, while an LED light bulb is way more expensive than an incandescent bulb, it is also way more efficient and way longer lasting. The average incandescent bulb lasts about 1200 hours and will cost you $328 per year to keep lit. The average LED bulb will last about 50,000 hours (41 times longer) and cost you $32 per year to keep lit.

Today we bought our first LED bulbs. The bulbs do cost more. We paid about $6 for one bulb to put in our front yard (our HOA demands that each house have a security light post with a light bulb and a light sensor so it stays on all night). That light is on 10-12 hours every. Single. Night. And now my electric bill is going to go down. As we replace more bulbs, the bill will go down even more. As the following chart shows, these bulbs are more efficient, more durable, and better than the incandescent bulbs. 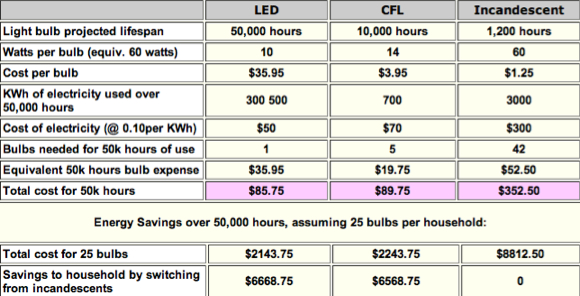 Their only drawback: they probably wouldn’t work anymore if you ever got hit with an EMP. So, barring nuclear war, LED is the way to go! 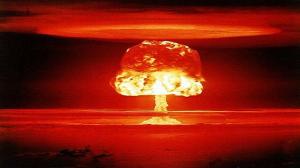 If you see this, your light bulbs will be the least of your problems.

2 Responses to LED Light Bulbs: Get Some!