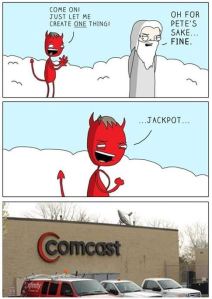 I’ve always said I don’t have problems with Comcast internet.  I know many people do, and they are consistently rated as the worst company in customer service, but I’ve never really had a problem that wasn’t fixed quickly.  I’ve had some equipment issues, but those are always fixed relatively quickly.  I didn’t enjoy their glitchy tv service, but I got rid of that, so no issue there.

When I changed my services in February (because I bought my own modem), they told me that I could have internet for $75 per month, or internet and basic cable for $50.  So I said, “Do I have to even hook up the tv?” They said no. Sold, I said.   They also mentioned that I would receive free access to the “HBO Go” (HBO on demand) service.  I was able to watch HBO movies (most of them are garbage, but there are a few good ones, and I really enjoyed the “Number One Ladies Detective Agency” miniseries.  In May Comcast finally figured out how to let people with Amazon Kindle Fire sticks use the service, so I activated HBO Go through Comcast for my Kindle Fire Stick.

I got my Comcast internet set up at the new place, and still have all the same services, including access to HBO Go. But it wouldn’t let me use the Kindle Fire Stick to watch HBO Go, saying I needed to reactivate it (new IP address maybe?).

So I went to hbogo.com/activate, and yes, Xfinity is still listed as an available provider for the Kindle Fire stick. But when I click Xfinity, it takes me to an Xfinity page which asks me to sign in, and then tells me that I do have HBO access, and I am welcome to watch HBO stuff through Xfinity’s go website.

So I called Comcast yesterday. After talking to four different people, the last one told me that my case would need to be referred to “a supervisor” and that since none were available right now, one would call me later on. I guess I should have asked when “later on” might be, because it’s the next day and still no call. I called them back, spoke to two different people before I got to the right department, which informed me that “Comcast doesn’t support the Kindle Fire Stick for HBO Go.” I told her that yes, Comcast does, because I was just using it a few weeks ago. She said, “no, we don’t” and hung up on me.

I called right back. Explained the whole situation again, and was given a phone number to call for “the department that can help you.” The number was 212-512-1000. I called the number. “Hello, you have reached the New York office of HBO….”

Comcast. The most frustrating company on earth.