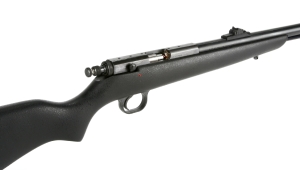 This is the type of gun I have. Mine has a scope and a wooden stock, but otherwise the same.

Today has been kind of frustrating, but it ended well. I had the right gun but the wrong ammunition. Details below:

My best friend knew I couldn’t afford to hunt in Missouri this year, so he gave me a muzzleloader for my birthday/Christmas/Thanksgiving/Kwanzaa present. That way I can hunt in Indiana, which is one of those weird “no rifles” states.

For those of you unfamiliar with muzzleloaders, you need three things (other than the gun itself) to shoot it: a slug (the “bullet”), gunpowder (I use Pyrodex pellets), and percussion caps or primers. My gun is a Knight Rifles “Black Knight” model, and the specs say it uses a #11 percussion cap. Guess what? It doesn’t.

Today I grabbed my gun and accoutrements and headed to the closest free gun range so I could sight in the rifle (make sure the scope is pointed straight). That would be the Wilbur Wright Wildlife Area in New Castle, Indiana. That’s about an hour away from my house. I didn’t know I had the wrong percussion caps until I got there and tried to fire the rifle. I drove home.

Tonight I spent about an hour talking to different stores to see who carries either the right caps (nobody) or the conversion nipple for the cap (nobody has it in stock). I called my friend from church, Hank, who said he would give me some musket caps. I drove to his house (about a half hour away), got the caps, and drove home. These caps are too big, but so long as I don’t point the gun up in the air, the cap should stay on the nipple (and yes, that’s really what it’s called).

Tomorrow is payday, so I can buy my hunting license ($24) which is cheaper than the “nonresident license” from Missouri ($225). So tomorrow I hunt in Indiana for the first time. Look out, deer!