James was moving.  This was his first thought.  Being human, he immediately began to wonder where he was, and where he was going. He sat up, opened his eyes, and looked around.  He was in a metal box with no roof.  He looked up and saw clouds going by. He sat up a little more and was just able to see over the top rim of the box.  I’m in a mine cart, he thought.  He looked around, but all he could see was the cart, the sky, and the track stretching out in front of him. 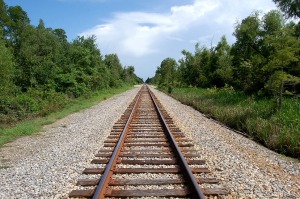 This is odd, he thought.

Then the signs started to appear.  As he rolled down the track, he saw many signs that said many different things.  “Eat at Joe’s!”  “Buy from Big Ed if you want Quality!”  The signs were varied, and distracted him from the fact that he had no idea where he was going.

As he continued to read the signs, he noticed that some of them had conflicting messages.  Finally, he came to a sign that said, “Hey you, in the mine cart:  you are on a crash course for destruction.”  Strange, he thought.

A little later, he noticed another sign that said “The end of your track is coming! Are you ready?”  He began to get nervous.  He didn’t like reading those signs.  He would rather read the funny signs, the amusing signs, the ones that didn’t make him feel uncertain.

Finally, James came to a sign that said, “Switch tracks!”  Switch? He thought. How do I switch? And why would I want to?   He decided to ignore those signs. They made him uncomfortable.   Just as he thought this, his cart came to a switch.  As he watched, he saw the track bifurcate up ahead. He saw the switch lever, but he decided he would just keep going, to see what would happen.

James passed the switch.  He watched the other track veer to the right, and get steadily farther away until he couldn’t see it anymore. He looked around and thought, I’m still here, even though I didn’t switch tracks! Those signs must be lying about all that destruction.

As the miles wound on, he saw several more signs warning of the destruction ahead, but he kept ignoring them. He passed many switches, but used none of them.  Some of the signs even gave advice, saying things like, “There’s no such thing as the end of the track.”  And, “Even if there’s an end to the track, you can always switch off the track right before it ends.” James agreed with these signs.  They made perfect sense to him.

But the whole time a little voice was needling him, telling him he was making a mistake.  He passed several more switches, but ignored them all.

The terrain began to get rocky and barren.  Dark clouds began to fill the sky.  The air began to fill with a mist that was hard to see through.  He looked ahead, but could only see about ten feet in front of his cart. He thought about all the switches he had passed.  He thought, Maybe I will take the next switch I come to.  But it was only a few moments later that his track ended, and he fell over the cliff that had been obscured by the mist.  As he fell, he wondered why he hadn’t hit those switches before it was too late. 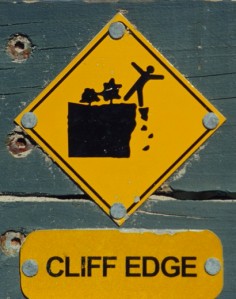 Do not put off the choice to trust Christ, for tomorrow is not promised to anyone.

I am the current pastor of the Rapids Street Baptist Church in Adel, Iowa. Every day I commit my life to Jesus Christ. I am also a registered nurse working to support my ministry and my wife and three kids. I am a conservative Baptist. This blog is my view on life. My prayer is that, by reading what I write, you will learn more about me, more about God, and be assisted in becoming the person God means for you to be. If you have a question, just e-mail me at spicray AT gmail DOT com. God Bless!
View all posts by Steve Picray →
This entry was posted in Bible, God. Bookmark the permalink.